Benue State is a state in the mid-belt region of Nigeria with a population of about 4,253,641 in 2006 census. It is inhabited predominantly by the Tiv and Idoma peoples, who speak the Tiv language and Idoma, respectively. There are other ethnic groups, including the Igede, Etulo, Abakwa,[2] Jukun, Hausa, Igbo, Akweya and Nyifon. With its capital at Makurdi, Benue is a rich agricultural region; some of the crops grown there are potatoes, cassava, soya bean, guinea corn, flax, yams, sesame, rice, and grand nuts.

Benue State is named after the Benue River and was formed from the former Benue-Plateau State in 1976, along with Igala and some part of Kwara State. In 1991 some areas of Benue state (mostly Igala area), along with areas in Kwara State, were carved out to become part of the new Kogi State. Igbo people are found in the boundary areas of Ebonyi State and Enugu State in local government areas like the Obi, Oju etc.

Samuel Ortom is the governor and Benson Abounu is the deputy governor. Both are All Progressives Congress (PDP) members.[3]
Benue state has three universities: Federal University of Agriculture, Makurdi, Benue State University, Makurdi, and University of Mkar, Mkar, Gboko. It has two polytechnics: Benue State Polytechnic, Ugbokolo and Fidei polytechnic, Gboko as well as the Akperan Orshi college of Agriculture Yandev. There are about four colleges of education which are Federal College of Education Agasha, College of Education Oju, College of Education Kastina Ala. Benue State as it exists today is a surviving legacy of an administrative entity which was carved out of the protectorate of northern Nigeria at the beginning of the twentieth century. The territory was initially known as Munshi Province until 1918 when the name of its dominant geographical feature, the ‘Benue River’ was adopted. 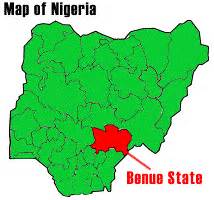 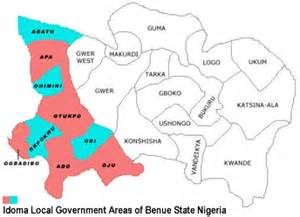